In order to handle any sort of radiation sources, you have to go through the radiation safety courses offered by the Environment, Health and Safety Department at UW-Madison. Training consists in watching a safety video, taking a quiz and having an on site training. The video can be found under the following link.

Radiation is defined as energy transferred by particle or wave. Ionizing radiation has enough energy to free electrons from an atom and create an ion pair. This includes alpha, beta, gamma radiation, x-rays and neutrons. Microwaves, infrared, visible and lasers are types of non-ionizing radiation.

-X-rays – emitted from the electron orbital when it moves from a high to a low energy state.

-These are atoms with the same number of protons and different number of neutrons. When radioactive, these are called radioisotopes and are unstable. They give off energy and decay into stable atoms. This energy can be absorbed by the body, and this absorbed dose is called a RAD (Radiation Absorbed Dose).

All radioisotopes have a half life. This is the amount of time it takes for the isotope to decay to half its original activity (measured in Curies (Ci)). Curies measure quantity of radioactive material and its SI unit is the Becquerel. An isotope is considered ‘decayed to background radiation levels’ after about 7-10 half lives.

Once the absorbed dose (rads) is weighted to the type of radiation, REMs will give the total dose to the radiation worker.

-Deterministic effect (acute): severity of the injury increases with dose as well as probability of occurence (e.g. radiation induced cataracts).

*Major Finding: Approximately 0.08% of people die from radiation induced cancer after an acute dose of 1 Rem. 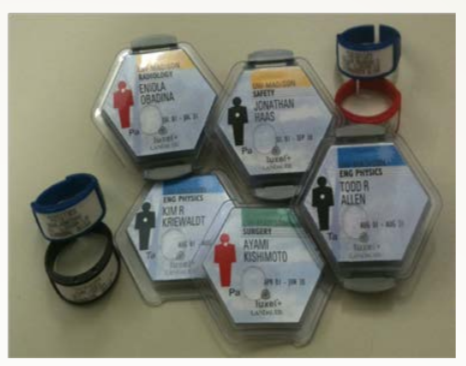 -These are used to measure external radiation.

-Internal contamination is measured with a urine analysis to measure H-3 in the body.

-Iodine concentration in the thyroid is quantified with a different device.

-ALARA = As Low As Reasonably Achievable

-Minimize the amount of time you are handling the source

-Dose rate correlates inversely to the square of the distance

-Control access to an area must be implemented when using ionizing radiation.

-Workers must receive training, informed where radioactive material is stored and of the risks associated with the exposure.

-These areas MUST be labeled.

-Radioactive materials MUST remain under surveillance to avoid them from being lost or stolen.

-A locked cabinet/freezer/refrigerator are good options if constant surveillance is not an option.

-Waste containers are provided by the Radiation Safety Department at UW-Madison.

-Isotopes should NOT be mixed in containers.

-Do NOT allow accumulation of radioactive waste in the laboratory.